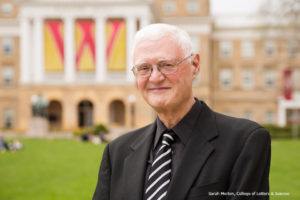 During his long and distinguished career at UW–Madison, Donald Downs was the Alexander Meiklejohn Professor of Political Science, Law, and Journalism at UW-Madison, and the Glenn B. and Cleone Orr Hawkins Professor of Political Science. He directed and co-founded the University’s Wisconsin Center for the Study of Liberal Democracy (CSLD) from 2007 to 2015. The Center is dedicated to instilling critical knowledge and understanding of the core principles, institutions, and processes of liberal democracies, and to the advancement of genuine intellectual diversity on campus. Downs is also the former director of the University’s Legal Studies Program and its Center for the Study of Law, Society, and Justice (2004-2007). In 1996 Downs helped to found the independent and non-partisan faculty group, the Committee for Academic Freedom and Rights, one of the nation’s leading campus academic freedom and free speech groups.  He subsequently served as secretary and later president of the Committee. Professor Emeritus Downs retired from active service at UW–Madison in 2015.  He continues to serve on the CSLD Advisory Board.