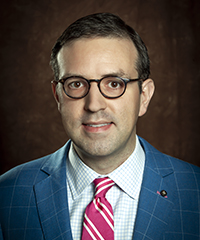 Please join us on Tuesday, April 20th, for a talk about Catholic Social Thought and its practical implementation in Public Policy by Professor Gladden Pappin.

Dr. Pappin is an Assistant Professor of Political Science at the University of Dallas where he teaches courses in political philosophy.  In addition, he is the deputy editor of American Affairs, a quarterly journal of public policy and political thought, which he co-founded with the editor, Julius Krein, at the beginning of 2017.  Pappin’s own scholarship focuses on early modern political and ecclesiastical thought, the development of modern liberalism, and contemporary political questions.

CLSD is hosting this event as part of its Catholic Social and Political Thought Initiative.

Contact John Boersma (csld@wisc.edu) to request a link for this talk.